Occupants and history of 222 Trade Street

The 1898 Sanborn map shows nothing in this space... well, mostly. Just beside it to the north stood a very small single-story wood building: the Greers Post Office. That building was mostly in the next space up, but a foot or two encroached over into this space. At the time, this stretch was labeled 207 Trade Street.

The 1904 map shows that the little wood post office is gone, replaced by a row of brick stores. In this spot stands the new Post Office, more than double in size from the previous building; it's a single-story brick building, almost square, with a wood loading dock on the back. Where that previous building stood, in the lot to the north, now stands Marchant's Pharmacy: the prior location to the now-famous Rexall Drugs (Greer Drug Company) built six years later all the way up the block on the corner of Trade and Victoria. Beside the Post Office on the south side is a jeweler.

These buildings would be replaced with larger, nicer buildings just five or six years later. We have two wonderful photographs that capture this place in this little sliver of time.

By 1911 the Post Office has moved to a larger location on Hill Street (now East Poinsett). This location is now labeled a grocery store.

The 1922 map simply labels it a "store," still numbered 207 Trade Street, but we know the occupant: Smith & James, which still occupies the building and is the oldest extant business in Greer (if you don't count Greer CPW). Thomas Smith founded the store in 1916 as Smith & Vaughn. The Greer Observer newspaper announced the opening of Smith & Vaughn as an “exclusive up-to-date Gent’s furnishings store.” In 1919, the name of the store changed to Smith & James when Mr. Vaughn’s share of the store was sold to Don James.

During the 1930’s through the 1970’s, Paul Smith, Sr., the founder’s nephew, operated the store. His son, Paul Smith, Jr. and Bernard Price worked under his expertise for many years before partnering together to buy the store.

In 1991, Paul Smith, Jr. sold his share of the business to Bernard Price; his son, Brandon, joined him. Bernard Price has retired and Brandon operates the store. In 2010 Smith & James opened a second store at The Shops of Greenridge in Greenville. In 2016 Brandon led a renovation of the Greer store, which included changing the carpet to hardwood and installing antique iron railings. 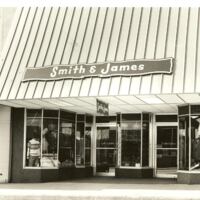 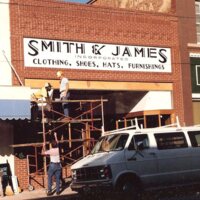