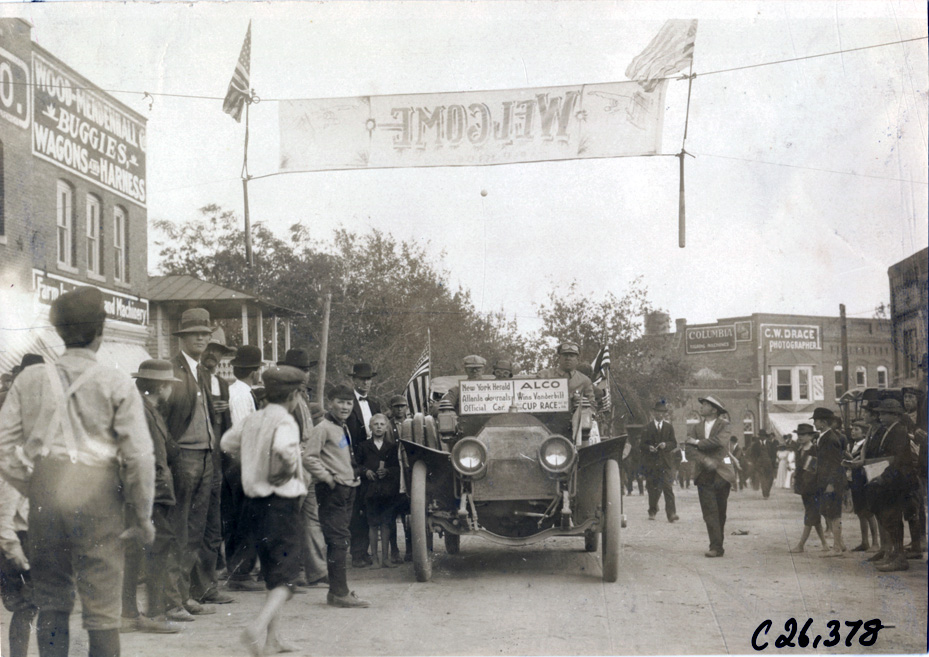 At the beginning of the 20th century, the newfangled automobile caught the attention of America. The focal point became an annual race in New York — the Vanderbilt Cup. After the 1909 Cup ended, another race began: the New York Herald – Atlanta Journal Good Roads Tour (the same New York Herald which, in 1874, ran a story on a mass escape of animals from Central Park Zoo: one of the most wonderful hoaxes ever played). The Good Roads Tour intended to mark out a new national highway between New York and Atlanta. Thirty-eight cars left New York, some of them racing each other to their destination, others just parading down the route. Their course took them right through downtown Greer before continuing on toward Anderson.

A photographer toured with the group, and his collection of photos from the trip are in the Detroit Public Library. One of those photos shows the moment that the star of the show, the ALCO car that had just won the Cup, roared past Greer’s Wood-Mendenhall Company, purveyor of Buggies, Wagons and Harnesses. It had to feel like a powerful moment: the new world passing by the old in a cloud of dust. With the benefit of retrospect, we can see that it was more true than they knew: this ALCO car had been built by the American Locomotive Company, manufacturer of steam engines, which would quickly be overtaken in their automotive pursuits by Ford — and their locomotive business, eventually, by electric and diesel engines that ALCO never could quite match.

There is so much to see about Greer in this one little picture. One of our residents hand-painted a banner welcoming the tour; the bottom corners are weighted down with baseball bats. Schoolboys, books under their arms, line the street; dressed up by today’s standards, yet many of them not wearing shoes. Times were changing fast!